Distance running is a solitary sport for many people, but for Dave DeVeau it’s a team builder. The Finance Manager of Yavapai Regional Medical Center (YRMC) peppers conversations about his running experience at the Whiskey Row Marathon with words like coach, comradery and team.

It was Dave’s co-workers in YRMC’s Finance Department – led by Chief Financial Officer, Lee Livin – who got him interested in running.

“There was strong comradery among us right from the gate,” said Dave. “Lee got us started with running and soon we were talking about our training schedules and running together when we could.”

Lee recommended a structured approach to running that appealed to Dave. He suggested websites and articles on the science of running.

In 2016, Dave ran the Whiskey Row Marathon 10K with his wife Stacy. They crossed the finish line together with hands clasped in the air and smiles on their faces. 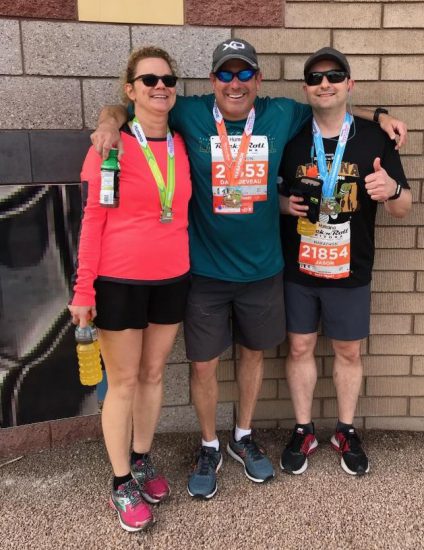 Dave was inspired. He continued training with his YRMC colleagues, trimming eight minutes off his time between the 2017 and 2018 Whiskey Row Half Marathon. He’s currently training for the 41st Annual Whiskey Row Marathon (half marathon) on Saturday, May 4, 2019. It’s especially motivating since YRMC is the event’s Signature Sponsor.

Dave’s training schedule typically includes five-mile runs throughout the week and long runs on the weekend. He likes the Peavine and Iron King Trails.

“I get into my own world during long runs,” Dave said. “It’s a great stress reducer. Sometimes, I’ll run 15, 18 miles and then realize I have only two miles to go.”

The long runs also help Dave prepare for hitting the dreaded “wall” during a race. Runners reach this point when their stored muscle energy (glycogen) is depleted.

To avoid this, Dave recommends eating breakfast – he likes an egg sandwich – and packing high-energy snacks for along the race course.

“The last thing I want to do after intense training is walk the final three miles of a race,” he said.

The Energy of the Crowd

The crowd’s energy and enthusiasm help Dave power through to the end of the Whiskey Row Marathon.

“When you get to the Courthouse Square, people are clapping and cheering,” Dave said. “So, when I come around that last block, I kind of turn it on and get as close to a sprint as I can.”