The stained glass windows at the Chapel of the Valley in Prescott Valley tell many stories. The eight windows – works of art made in Europe – depict stories from the Bible. They also are the source of less obvious stories about the history of healthcare in the Prescott area, a friendship that led to the realization of dreams for two people and a gift to the community.

Let’s begin with the story about the history of healthcare.

The Sisters of Mercy opened Mercy Hospital, Prescott’s first hospital. Soon after the hospital opened its doors, they began work on a Chapel, a separate structure that would reside on the hospital’s grounds.

The stained glass windows were to be the Chapel’s focal point. The sisters had them made in Germany and transported to Prescott. 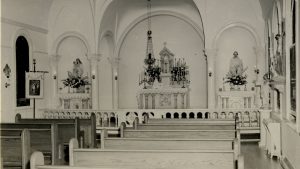 “The Chapel’s windows were created in an old world style,” said Dawn Wasowicz, Director, Chapel of the Valley and Owner, Rafter 11 both in Prescott Valley. “It’s very different than how stained glass is created in our country.”

In the United States, Dawn explained, small fragments of glass are “leaded” together to form a picture.

These glass pieces are pieced together to create a picture. In this case, they were framed into eight windows for Mercy Hospital’s Chapel. The Chapel with its breathtaking stained glass windows opened in 1906.

Unfortunately, Mercy Hospital burned down in 1940. While the Chapel was not damaged, the sisters decided not to reopen the hospital. The stained glass windows were put into storage.

Which takes us to the story of the friendship forged around the Chapel’s windows.

Johnie Lee Parsons moved with her family to Prescott when she was in her early teens. The Texas-born Johnie Lee loved horseback riding, playing basketball and making music on the piano.

At Prescott High School, she met Norman Fain. The two married in 1928 and the couple worked together running ranches that grew to include much of what would eventually become Prescott Valley.

According to granddaughter Dawn, Johnie Lee was a very spiritual woman.

“When Johnie Lee walked into a room, grace walked in,” said Dawn. “It was like turning on a light or a sunrise. It was that profound.”

Johnie Lee also had many diverse interests and talents. She was a writer who shared stories about pioneer life on the radio. She served as president of the Arizona State Cowbelles, a voluntary organization dedicated to supporting beef cattle ranching.

“Before she married, my grandmother studied music at the Conservatory in Fort Worth,” said Dawn.

So it was no surprise that Johnie Lee was eventually invited to a piano recital at the home of Henry Lovell Brooks. A teacher at Orme School for 14 years, Henry loved music. He was an organist at churches in Chino Valley and Prescott.

“Everybody in the Prescott area has someone who has been at a piano lesson with Henry Brooks,” said Dawn. 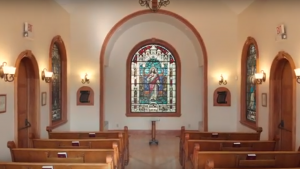 Henry also valued art, history and was a spiritual man. This no doubt motivated him to salvage the Mercy Hospital stained glass windows. At great personal expense, Henry had the windows restored and then placed, as a temporary location, in his home.

While Johnie Lee did not live to see the Chapel completed, she was involved in selecting its location near Fain Lake in Prescott Valley.

“Johnie Lee wanted the Chapel of the Valley to be nestled in nature,” Dawn said.

She also participated in other decisions about the Chapel of the Valley.

Henry donated the stained glass windows to the Chapel. He visited them many times in their permanent home. He also donated his organ to the Chapel of the Valley after his death.

In a final tribute to the windows’ history, each individual stained glass window was dedicated to a community member, many involved with the community’s first hospital. The names of the hospital’s first chief of staff, a nurse, a former patient and more are engraved on plaques beneath each Chapel of the Valley window.

Dawn knows Johnie Lee and Henry would appreciate this gesture to people dedicated to the first hospital in the community.

“Johnie Lee wanted to create a Chapel for all people to enter and have peace, feel secure and have that sense of healing that we want so much in our county,” said Dawn.

That dream was fulfilled thanks to Johnie Lee Fain and Henry Brooks.