You could say Elisabeth Ruffner first fell in love with her husband-to-be, Lester “Budge” Ruffner, and then with her adopted hometown of Prescott.

“Budge and I met when a sorority sister asked me to go on a blind date with two young men who were students in the Mortuary Science College at the University of Cincinnati,” Ruffner said.

Elisabeth, who was studying medicine at the University, was up for an evening of dancing.

“By the end of the evening,” Elisabeth said, “the man who was dating my sorority sister asked me for a date. And that’s how it all began.”

The couple married on August 10, 1940 at the Ruffner residence in Prescott. Soon after, Budge began his service in the United States Army Air Corps. On his return to Prescott, he joined the family business at the Ruffner Funeral Home.

While raising the couple’s three children, Elisabeth also pursued her career as a community volunteer. One of her first projects involved something near and dear to her heart – ensuring the availability of healthcare to the people of her growing community.

Elisabeth was among the community members who ensured the hospital would serve as a non-profit, community-based provider. She helped draft the document that launched Prescott Community Hospital Association, Inc., as an Arizona non-profit corporation. The Association purchased the vacant Jefferson Elementary School on Marina Street for $1,000 and converted it into a hospital.

War efforts made medical supplies, hospital furnishings and physicians difficult to come by. A local rancher purchased what was believed to be the last operating room table not headed overseas. Two other area ranchers successfully challenged the people of Prescott to match their $10,000 contributions. Florence Yount, MD, traveled the region searching for beds, stoves, tables – any kind of hospital equipment she could locate.

And with this community support, Prescott Community Hospital opened on March 1, 1943. By 9 p.m. on that date, Dr. Yount had delivered the hospital’s first baby. 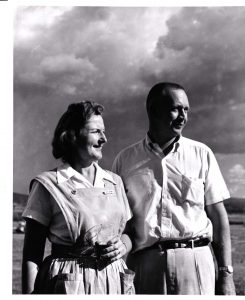 Soon the hospital was caring for more and more patients. Elisabeth and others saw the nurses and other medical professionals needed support, so they organized the Women’s Hospital Auxiliary. The goal of the Auxiliary was to free nurses and aides from duties that were unrelated to patient care. The “pink ladies,” as they were called, folded linens, staffed the reception desk, assisted hospital visitors and more.

In 1960, the community again came together to support non-profit, community-based healthcare. They voted first to establish the Central Yavapai Hospital District and then in 1962 they voted to build a new hospital that would replace Prescott Community Hospital.

“I believe it was the first time, at least in Arizona, of a non-profit local association taking over a government hospital,” said Elisabeth. “We provided a clinic for the county and then with a Hill-Burton Grant from the federal government, we built the wing to the south, which is now Yavapai Regional Medical Center.”

In 1964, the hospital relocated to its current location on Willow Creek Road and changed its name to Yavapai Community Hospital. The hospital underwent another name change in 1984, becoming Yavapai Regional Medical Center. This change reflected the scope of its advanced medical services and growing service area.

How does Elisabeth feel today about the community-wide healthcare network that grew out of the school on Jefferson Street?

“I have total confidence in it,” she said. “I know that when I arrive as a patient, I will be given the best possible service and loving care.”