John Spitalieri, DO, believes in “repairing before replacing.” His parents – his mother a music teacher and his father a math/science teacher – impressed this value on him while growing up in New Jersey.

“Whether we were fixing the car or repairing the lawnmower, it was my job and my brother’s job to help our Dad,” said Dr. Spitalieri. “We would hold the light so he could see what he was working on or he would have us fetch a tool for him.”

Fast forward to 2018 and the Yavapai Regional Medical Center (YRMC) PhysicianCare Neurosurgeon is passing on this life lesson to the next generation as he works with his nine-year-old son on building projects.

Dr. Spitalieri’s tools are from his father – who worked at Yankee Tool for a time – made by Dr. Spitalieri in his workshop or found at antique shops. Instead of using a power sander, for example, Dr. Spitalieri has a pre-World War I block plane to smooth the surfaces of edges he plans to join together. 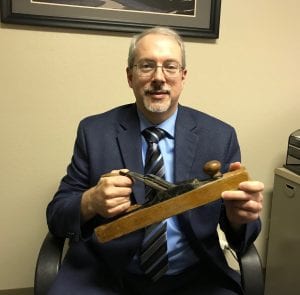 Dr. Spitalieri’s woodworking tools are from his father, made by Dr. Spitalieri or antiques he has collected over the years.

A Neurosurgeon is Born
Dr. Spitalieri’s career choice was influenced by several people including his father and, later on, Neurosurgeon Martin Swiecicki, MD.

“I decided to become a neurosurgeon quite late in life. I was seven years old,” Dr. Spitalieri said with a smile. “My mentor, Dr. Marty Swiecicki, told me he made up his mind when he was five.”

Dr. Spitalieri first was exposed to the workings of the brain and spine while perusing one of his father’s college anatomy textbooks.

“Shortly after that, I started telling people I was going to be a brain surgeon,” he said. “I’m not really sure I knew what that meant at that age, but it sounded pretty cool.”

Even cooler is that Dr. Spitalieri realized his childhood dream. He graduated from Philadelphia College of Osteopathic Medicine and then pursued a neurosurgery residency at Arrowhead Regional Medical Center (ARMC) in Colton, California. The San Bernardino County hospital, ARMC has the second busiest Emergency Department in California with a heliport that easily holds five medical helicopters.

After his residency, Dr. Spitalieri pursued a fellowship in Neurosurgery at Cooper Hospital in Camden, New Jersey followed by a Pediatric Spine Surgery fellowship at Shriner’s Hospital in Philadelphia.

Prescott Calls
After living in large urban areas, Dr. Spitalieri, and his wife Donna – a Labor and Delivery Nurse and Nurse Midwife – decided they wanted to live in less populated communities. The couple learned about the Quad Cities through Kiplinger’s Magazine, which touted the area’s four mild seasons and diverse activities ranging from the arts to the outdoors.

“We love it here. The people are friendly and we always find something to do.”

“Compression fractures are very painful,” said Dr. Spitalieri. “They’re no less painful than breaking your arm. But when you break your arm, you go to the ER within a day or two where you get a cast and then perhaps have surgery. With compression fractures of the spine, it usually takes weeks before they’re appropriately diagnosed. People tend to think, ‘I just threw my back out.’”

Dr. Spitalieri repairs these spinal fractures with a procedure called kyphoplasty. He uses a hollow needle to insert a balloon into the fractured bone and then creates a cavity or space. After the balloon is removed, a medical-grade cement is injected into the cavity to stabilize the fracture.

While the tools he uses to treat patients are state-of-the-art, Dr. Spitalieri’s strong work ethic and problem solving skills are the same as when he worked alongside his father in the family’s garage in New Jersey.

“Those are good, strong memories for me.”

And now the Spitalieri family is building memories in the Quad Cities.