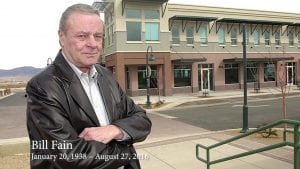 Bill Fain is remembered for many achievements: bringing water into the dry patch of land known as Lonesome Valley … envisioning and then bringing to reality the vibrant town of Prescott Valley … giving generously to myriad community causes … and constructing Granville, the area’s first master planned community.

Brad Fain – the youngest of Bill and Nancy Fain’s four children and CEO of Fain Signature Group – adds to that list of accomplishments.

“Part of my father’s legacy is that he helped make healthcare readily available through a generous gift,” Brad said. “A community needs healthcare, schools and parks. It’s all part of the fabric of the community.”

Watch Our Memories of YRMC: The Fain Family on YouTube. 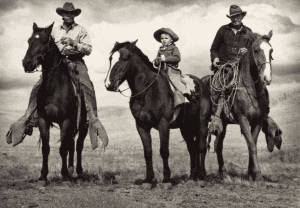 A Generous Gift
That generous gift from the Fain family came in the form of the land – prime Prescott Valley real estate – on which Yavapai Regional Medical Center (YRMC) East stands today.

Bill and Nancy Fain’s significant gift may also have been inspired by a personal experience, the kind parents don’t forget. It happened one morning about 40 years ago when Ron Fain – 5-years-old at the time – tagged along with his Father to the ranch. Ron loved playing – exploring the fields for treasures – while his Dad and his team lined up the work for the day. This time, however, his treasure hunt turned dangerous when he took a drink from a jug he found.

“It turned out to be kerosene,” said Ron, who is now Fain Signature Group’s Director of Sales and Marketing.

After a frantic call to Yavapai Community Hospital (now YRMC West), Bill was instructed to have his son drink as much milk as possible. The Emergency Department team would be ready when he arrived with young Ron.

“Dad burned out an engine on the way to the hospital, but we got there and at the end of the day it all worked out,” Ron said. “That was probably a 20-mile drive with kerosene in my stomach versus what today would be a three-mile drive to YRMC East.” 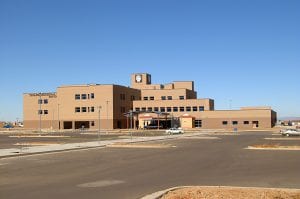 YRMC East in Prescott Valley just before its opening in 2006.

A Dream Realized
Nancy Fain, who moved to the community after marrying Bill in the 1960s, recalls her excitement when YRMC East opened in 2006.

“I took three different tours of the hospital,” she said. “I just couldn’t seem to get enough of it. It impresses me the way that it’s expanded; you have the Birthing Center, the BreastCare Center, the Infusion Center and the Outpatient Center. It’s just beautiful, the way it has happened.”

That growth all stems from Bill Fain’s vision for a thriving community. Bill’s sons, Brad and Ron, agree that economic development was their father’s greatest gift to the community.

“Everything had a purpose,” Brad said. “Dad brought in the Prescott Valley Town Hall – that had a purpose. A community needs a place for civic activities, and its courts and a police station.”

YRMC East also was part of the community’s equation for success. The hospital – and its other services – has both boosted economic development and enhanced residents’ quality of life, according to the Fain family. The proximity of high-quality hospital services attracts employers. The hospital also improves property values for area homeowners.

A Bright Future
With the community’s strong infrastructure in place, what does the future hold for Prescott Valley?

“It’s going to attract businesses we can’t even imagine,” Ron said. “The hard work of civic leaders, healthcare leaders, developers and the community is going to continue to put Prescott Valley on the map.”

“Prescott Valley will continue to grow and prosper,” said Nancy.

Just as her husband Bill envisioned.