Rachel Whisenand, MSN, RN, CCRN, CFRN, CEN, is no doubt the right person for the right job at the right time. A charge nurse in the Emergency Department at Yavapai Regional Medical Center (YRMC) West, Whisenand helped establish and is now managing the COVID-19 rapid treatment and triage tents at YRMC West and YRMC East.

What qualifies Whisenand to take on this crucial assignment? For Captain Rachel Whisenand of the United States Air Force, it’s all in a day’s work.

“This is definitely in my wheelhouse,” she said. “It’s what I do for the military with my squadron. We’re an aeromedical staging squadron which is essentially a portable, tent-style hospital—like a MASH unit. Because of COVID-19, I’m now doing something similar in my civilian job at YRMC.”

The Family Business
Whisenand’s career choices – healthcare and military service – were influenced by her grandparents. Her grandmother was a nurse. Whisenand’s grandfather a Navy Corpsman retired as the Master Chief Petty Officer, the most senior Enlisted member of the U.S. Navy.

“I come from a strong military family,” she said. “My grandfather was one of the last surviving three war combat veterans deploying World War II, Korea and Vietnam. He always told me, if you’re going to join the military go in as an Officer.”

Whisenand followed the paths forged by both of her grandparents. She joined YRMC in 2005 after earning a nursing degree from Yavapai College. Over the years, she also worked as a flight nurse, caring for patients being transported by helicopter and airplane. In addition to her work at YRMC, Whisenand teaches future nurses at Yavapai College.

“I’ve been connected to YRMC for a long time,” said Whisenand. “Even when I lived in Washington, I would take shifts in the Emergency Department when I came home to visit.”

In 2016, Whisenand realized a long-time dream when she was commissioned into the United States Air Force Reserve. There, she joined the Critical Care Air Transport Team (CCATT) of the 944th Aeromedical Staging Squadron (ASTS). The squadron is part of the 944th Fighter Wing at Luke Air Force Base in Glendale, Arizona.

Whisenand’s Worlds Merge
Whisenand describes her role in the Air Force Reserve as a hybrid of a civilian air ambulance service and a hospital-based Intensive Care Unit. Her CCATT is comprised of three medical professionals: a critical care physician, a critical care nurse and a respiratory therapist.

“We have a 500-pound pallet of medical equipment that’s ready to go at any time,” Whisenand said. “This gives us the ability to set up a six-bed ICU that is forwardly mobile. We can be anywhere in the world with 72-hours’ notice.”

The phrase “forwardly mobile” refers to the air transport aspect of the CCATT. When U.S. service members are critically ill or severely injured, it’s the mission of CCATT to retrofit the plane as a hospital nursing unit. They care for their patients as they travel potentially thousands of miles to a higher level of medical care. CCATT also transports service members home to the U.S. for care. While in the air, the CCATT monitor their patients and even perform procedures if needed.

All of this takes place in planes that are designed for other Air Force needs, such as the KC-135, which re-fuels military planes in-flight at 30,000 feet. Or, the “Cadillac” of Air Force transport planes, as Whisenand calls the C-17.

“We have one CCATT active duty team at Kadena Airbase in Japan that does most of the peacetime flying,” Whisenand said. “I was able to do an inbound mission with them when they flew into San Diego with a critically ill sailor.” 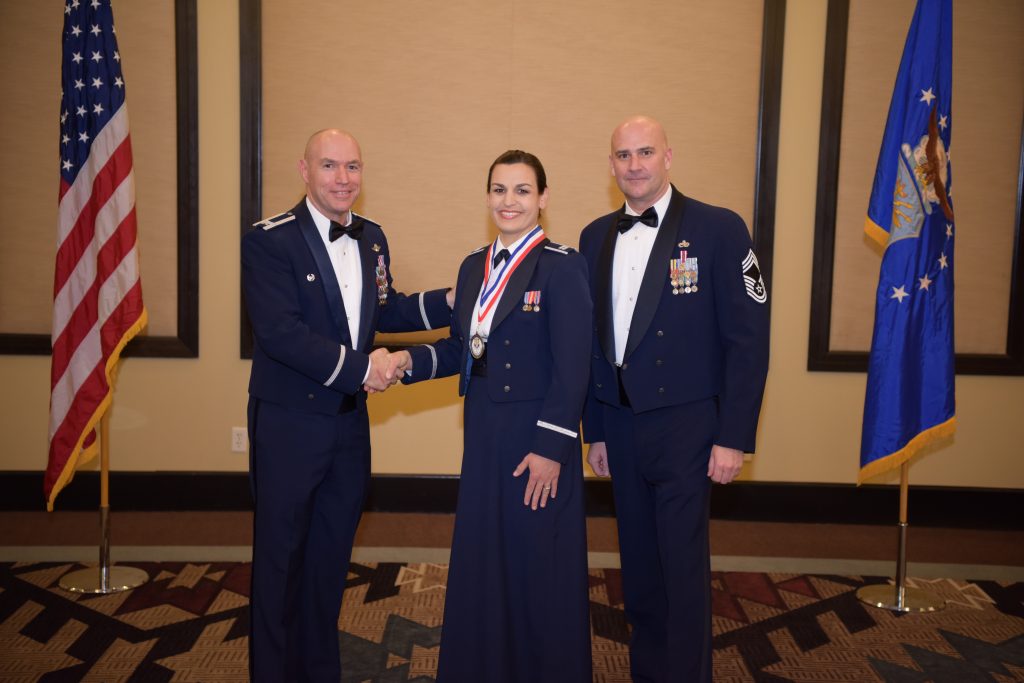 All of this no doubt led to Whisenand being selected as the 2019 Company Grade Officer of the Year. The annual award recognizes the distinguished performance of one of the 1,100 service members of the 944th Fighter Wing. Nominations come from the individual squadrons and the selection process is demanding.

“This award is such a huge honor,” Whisenand said. “I came to the Air Force later in life and only four years ago so that makes this award even more important to me.”

It’s also rare for a nurse to receive the award. The 944th Fighter Wing includes many fighter pilots who take on huge tactical missions as part of their service.

In fact, the only other nurse to be recognized as Company Grade Officer of the Year for the 944th was Rob Barth, RN, MSN, MBA, CEN. Barth is the Director of Emergency Services at YRMC West. He’s also Whisenand’s supervisor and a mentor.

“We’re fortunate to have such an outstanding team leading YRMC’s response to COVID 19,” said Ken Boush, YRMC’s Director of Marketing and Communications. “The knowledge and experience that Rachel Whisenand, Rob Barth and other members of the YRMC team bring to us is especially important during the COVID-19 outbreak.”