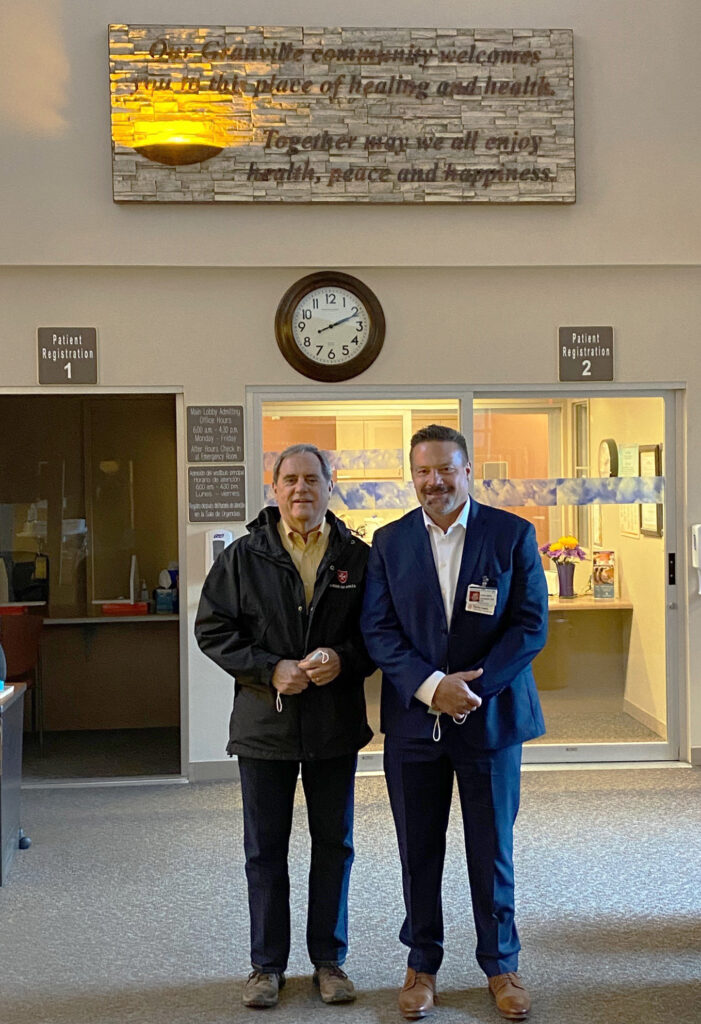 Joe Contadino, Founder and President of Universal Homes, and John Amos, President and Chief Executive Officer of Dignity Health, Yavapai Regional Medical Center, during the unveiling of the commemorative display at YRMC east in Prescott Valley.

During the ceremony, a commemorative display was unveiled bearing a special message for hospital patients and guests that reads, “Our Granville community welcomes you to this place of healing and health. Together may we all enjoy health, peace and happiness.”

Among those attending the event was Joe Contadino, Owner and President of Universal Homes, along with key members of his team and members of the YRMC Foundation and Dignity Health, YRMC leadership. Speaking on behalf of YRMC was Chief Executive Officer and Foundation board member John Amos. In his remarks, Mr. Amos recounted how instrumental Mr. Contadino was to the establishment of the Prescott Valley campus and how his continued support has contributed to its continued growth.

Mr. Contadino and Universal Homes was a lead donor in the YRMC Foundation’s $8 million capital campaign to help fund the Medical Center’s construction. Since opening in 2006, the support of Universal Homes and our community has enabled the continued expansion of campus programs and services including the Breast Care Center, Family Birthing Center, Infusion Center, Advanced Wound Care services, and the Vein Center.

Universal’s support of the YRMC Foundation continues today. Just as it has for many years, with every new Granville home sold, Universal Homes makes a donation to the YRMC Foundation in the name of the new homeowner. In closing, John Amos stated, “We are extremely grateful to Joe for his vision, his strong sense of community, and for his concern and commitment to the health and well-being of others.”

To learn more about the YRMC Foundation, please contact the Foundation office at (928) 771-5686, via email at foundation@yrmc.org, or visit yrmcfoundation.org.